I’ve always been one to believe that the most educational toys are the most simple of them. We’ve all seen our kids playing with the box instead of with the toy, it’s got to be for a reason. They open their minds. The box can be anything and everything their imagination sets it to be. Same thing happens with blocks. With them they can make towers, roads, walls, castles, fortresses. Blocks can be it all.

Unfortunately boxes wouldn’t survive more than 2 minutes in the bathtub. And blocks would have to be dried individually to ensure no mold growth. Insert my boys’ new favorite bath time toy, Bath Blocks from Just Think Toys.

Bath Blocks brings building with blocks to a new fun environment where getting your toys wet is half the fun. Waterslides, ball runs, floating roads covered in bubbles make bath time twice as fun.

The block set includes 10 blocks, 1 floating play base, a very colorful ball (which looks kind of retro and I love that!), and a reusable bag with a mesh on the bottom to allow water to run through. The blocks are both mildew and bacteria resistant which is a great plus for me. I have had to throw plenty of toys due to mildew growing inside.

We first gave the Bath Blocks a try in my shower. I explained how they work and what they did. I explained that bubbles would make the blocks stick together and to the wall. They got the message pretty well. I had to go to my bed to get their towels and in those few seconds J. had almost emptied his brand new shampoo bottle to ensure that his new blocks would stick together perfectly! At the end of that shower both my boys and their new blocks smelled like watermelon!

Their favorite on our first try was the blue floating board which stayed glued to my shower wall for a day until daddy took it down. So yeah, they stick pretty well! And it still smelled good.

Our second try was in the bath tub where J. resorted to get them covered in bubbles and then dumped them all in his red bucket (unfortunately I have no usable photos of this, shooting on a small, bad lit bathroom with a zoom lens is practically impossible). Then he played with the blue cup that comes with the set. He was happy as can be and completely ignored any of mommy’s attempts to get his attention (which means he was having the time of his life with the Bath Blocks!).

A. was the one who figured out that the blocks would stick to the tub walls. And off he went to make a trail down the wall. All serious and covered in bubbles.

As their name says, these blocks were designed to be for the water. And I must confess that they were more popular outside the bath than in the bath. As soon as we got the Bath Blocks in the mail my boys where making towers and roads and flying blocks.

A. must have done at least 5 different tower combinations and he would show off every single one of his creations.

As soon as J. woke up he was onto the blocks. Making. Creating. I didn’t had to say a thing and soon he was making the ball runs and towers. And his eyes will light up full of pride every time he made something new.

And every time he paused, he’d look at me and throw his arms up in the air and with a huge grin on his face he’d yell “Me did it!”. This made me smile the biggest smile ever. To see him create something from scratch and the pride in his eyes, it simply touched me.

Of course I went picture crazy and saw them imagine and create. It is amazing how something so simple, for bath time or any time, can teach so much to our kids. To see them use and improve their logic beyond their imagination, to see them grow, it is the best gift a mother could ever get. So, thank a lot to both Bath Blocks and Just Think Toys for bringing such happiness to this momma’s heart.

And on to less cheesy things…

One (1) lucky reader of From PDX with Love will win a Bath Blocks starter set! 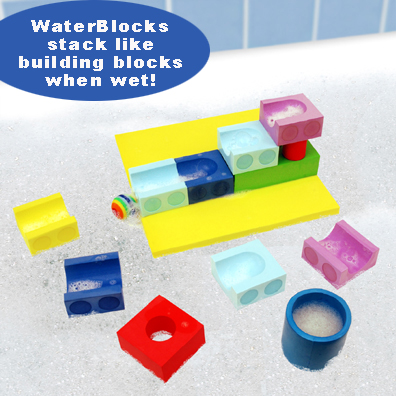 Open US only!!
Contest ends June 16, 2011 @ midnight PDT.
You must be 18 years or older.
Comments not meeting requirements will be deleted.

Please, only one email per person.
The mandatory entry must be done for any other entries to count.

The winner will be chosen using random.org (via Rafflecopter) and will be notified via email.

Disclosure: This was not a paid post. The opinions stated are my own and were in no way influenced by the Hosting Company who graciously provided the product for me to review. This promotion is in no way sponsored, endorsed or administered by, or associated with, Facebook.