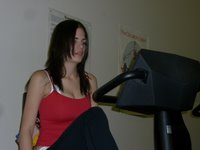 Today Sofia and I went to the YMCA to play racket ball again, and work out. She did incredible well making it through the entire circuit 1 and a half times plus a 20 minute run. I was very impressed. I think that even tho it is only day 2 of this she is starting to like it. She definantly was more aggressive about it today. It total we spent about 1 1/2 hours at the YMCA, it was a really good work out.

Afterwards Sophia thought it be best that everybody finaly get to see the building that we live in. So she set about taking multiple 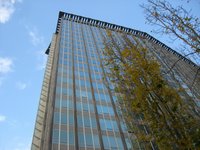 pictures from different angles. Next thing you knew we had pictures of the building, the drive way, the YMCA across the street, the church on the other block, and 45 minutes had gone by. The worst part about it was missing the picture of Waldo. Thats right Waldo, a Canadian dress in full red and black stripes walked bye. We were tempted to chase him down and take a picture by decided not to. I regret now because it was pretty funny. 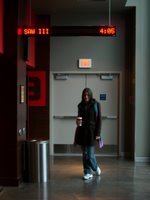 Later we decided on watching a show at the IMAX downstairs. Sofia is a huge fan of thrillers so the choice of the hour happened to be Saw III. A few of you have seen this movie I am sure. It wasnt bad, not as good as the first, but it was way more gory. This is probably the most gorr show I have seen to date. She loved it. 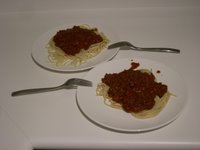 We ended the day with Sofia making her very first dinner for the two of us. So far I have been cooking with here help, but this night I actually got in trouble for even entering the kitchen. Yikes! She can be scary. hahahah. She made the two of us speggeti, and it was good. But I got in trouble for eating to fast and running of to play video games. Uh oh! I guess for future reference that one is a no no. Note to self: Dont go in kitchen when Sofia is cooking and dont leave di8nner early for video games.