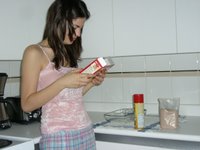 Thanksgiving day started pretty early, we were expecting mom and the rest of the family to arrive around 10:30 so Sofia got up so she could finish making the deserts. Last on the list was brownies. They ended up really good like most of the other deserts she made. I say most, because that one lemon merange pie ended up in the garbage. I think we should have slept in a bit tho, due to delays at the border no one got here until after noon. 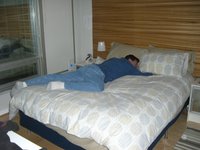 As soon as mom got here the turkey went into the oven and I got put on potato peeling detail. I tried arguing that it was the guys job to watch football on thanksgiving and the girls to cook, but that ended up pretty poorly for me. Rick didn’t even make it to dinner, he was out shortly after I got done peeling potatoes. 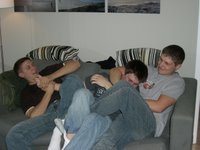 Even tho the place was really small it worked out well. By the time the turkey was done everybody was ready eat. I think I gorged myself, but after looking at Jon’s plate I wasn’t sure how he didn’t pop afterwards. Stuffed full and still wanting to eat we needed to find some good exercise to work up more apatite. Alex seemed like a good candidate. I think he left with one arm a little longer then the other. Lucky for him he still has a couple years of growth left in him and has a hope of evening them out. 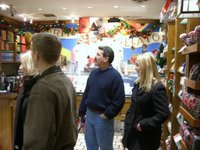 Dinner was fantastic Mom and Sofia did a great job. Afterwards we decided to finish up the day with a little shopping down on Robson St. and seeing Denzel Washington’s new flick Deja Vu. All in all it was a great day. Sofia and my first thanksgiving together and her first ever. I think that she really enjoyed herself. I even think that she liked baking all those deserts even with the oven acting up, she did a great job, as of today there is nothing left. I am already looking forward to next year.