If you are just like us you love watching cartoons, and yes, this includes you too mommies! And I am pretty sure you are familiar with Dinsey Channel’s Playhouse Disney, right?  Well, Disney is bringing a new cartoon: Timmy Time!

Timmy Time was created by the team behind Shaun the Sheep, so I bet you recognize this little guy. Timmy is a mischievous, independent little lamb who’s always getting into trouble but always tries to fix whatever problem he’s gotten into. This sounds so familiar! I think i might have my own Timmy: A (my oldest son)!

Timmy Time follows the adventures of Timmy, a little lamb with a lot to learn as he enters preschool. Fans of Aardman’s hit children’s series Shaun the Sheep will recognize Timmy as the baby lamb on the farm who is frequently drawn into all kinds of chaotic adventures by the mischievous older sheep. Used to having his way by being “the only lamb in the flock,” Timmy is now heading to preschool to graze on some important life lessons about playing nicely with others, namely his fellow classmates of the furry, feathered and spiky types.” 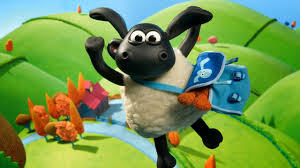 A couple of days ago A. was so cranky begging me to let him get on youtube to watch choo choos so I thouight to myself that since we were given two episodes of Timmy Time to reiew I’d let him weatch him with me and see what his reactions were. The moment the theme song for Timmy Time starte his eyes poped up and his frown turned into a cute little smile. So far, so good.

He was so engaged in the show! He reacted to every single thing that happened to Timmy and he would turn around to see me and explain to me what was going on! A. love the show!! J had the chance to watch it today and he did not move except when he tried to reach into the screen to touch the characters!

I will definitely recommend this show! I give it TWO THUMBS UP!

Disclosure: I received a cop of two episodes of Timmy Time for review purposes only. No other compensations was receive4d. The opinions stated are my own and where in now way influenced by the creators of Timmy Time or anyone involved with the show.