It has all come and gone. What I feared was nothing else but simple fear. My boy is doing great.

Wednesday morning went by fast. Boy took a bath and discovered how much he enjoys it! He fell backwards but he started kicking. Not even 2 minutes later, he was on his belly splashing water on his face and kicking the tub to get to the other site, turning around and doing the same. All with a cute little grin on his face.

Jokingly, Ty asked around what time I wanted to be at the hospital and I answered that anywhere between 11 and 11:30 would be great. He understood 11:13, no idea, don’t ask! He is just crazy like that.

Got dressed. Sailed off to the hospital.

He was a happy boy. He did not know what was going on or why.

We changed him into a smock, cleaned his belly and got ready to hand him over to his doctors. 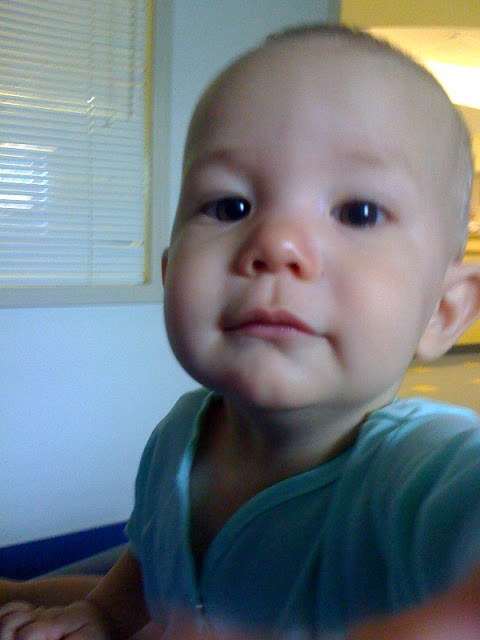 We got to play with him for a bit while waiting for the nurse to come give him some Tylenol with Valium. Another nurse then came to get us all. He took us to the pre-surgery room where we talked to both his Urologist and Anesthesiologist. And off they went.

I thought it was going to be harder on him to be taken away from me. But it was the other way around. As I saw his Anesthesiologist, whom he really liked and wouldn’t stop staring at, and yet again it could be the meds staring, taking him away from me I almost cry. But I had to be strong for both of us.

We were told at first that the surgery was going to take 2 hours. It took longer than that.

Apparently he had two hernias and not only one. And the right testicle was way up, next to the stomach so it took longer.

While we waited there were two code blues and a red code, none related to our boy.

We were later told that a code red means fire! An OR caught on fire! So hilarious…I don’t know why but it makes me laugh.

Two and a half hours later there comes Dr Herselj with the good news: my boy was doing great! I felt better. But we still had to wait almost 40 minutes to get to see him.

Once back in his room we had to wait for him to wake up. His OR nurse told us that he woke up crying so they had to double up the anesthesia. This caused him to wake up 1 hour later than anticipated.

His nurse told us that when he woke up he was so mad that after he got anesthesia once again he hid under the pillow and wouldn’t come out! 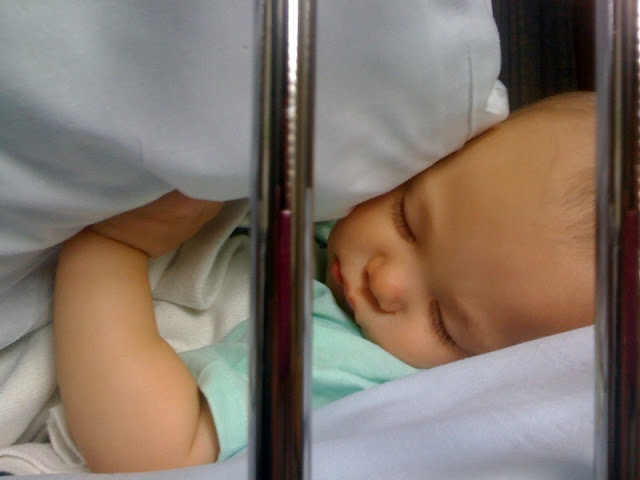 So, of course, I had to snap a picture!

He now has 4 incisions on his belly and one on his scrotum, from side to side.

We have to go back in one month for a check up. And there is a chance he will have to undergo the same surgery in a year or two.

That night, back at home, was the longest ever! He fell asleep after he nursed. A bit later he woke up crying his little heart out. In pain. I nursed again, gave him his medicine. But this time he wouldn’t let me put him down. Even on Codeine he was waking up in pain. So I held him for 5 hours straight until I couldn’t keep my eyes open and asked Ty to hold him and let me rest for one hour.

Ty took the boy downstairs and put him in his car seat where he seemed to do just fine. I guess there was no pressure on his sutures. For what I heard the next morning, boys did not sleep! Jake spent the next 5  hours watching TV!

Thursday he was back to almost his old self. He walked and ate his baby food and he even pooped! Which is a good sign he was doing good.

Today, well today he did awesome! And he was in such a good mood! Laughing and walking around the house like crazy and playing with Scratch! Simply adorable!

I am relieved and ecstatic that he is doing great. I was scared for a bit. But it is all good and gone!

Though…he just woke up crying. More meds, nursed and sleeping like an angel once again!

Thank you so much to everybody who kept my boy in their prayers. I believe these helped him during his surgery.