Meet the new addition to the Byrd family!! 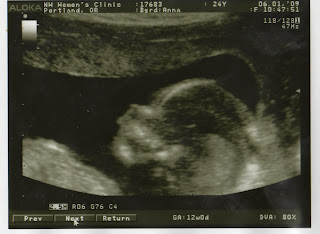 It’s a BOY!! Lululu..He has the same nose and same round head as Alexander. It looks like he is puckering! So cute!! And he looks HUGE!! Even bigger then Alexander when we had his ultrasound…Oh, and yeah…we thought I was less than 3 months along but I was wrong! I am 16 weeks along! (1 week more or less….but that happened with Alexander too, he was one week bigger)…

So excited!! I can’t wait! And yeap, no names yet!! I want the name to go with Alexander’s name. I mean, a traditional name. I don’t want to go with something too trendy or funky…like Kian or something like that. But it is sooooooo hard!! I still have quite a few weeks to decide on a name, right?? 😀

So, on to other matters. Looks like Tyler hurt his ankle really really bad!! It has a cool colored bruise! (It is like a deep purple…I am crazy, I know). And Alexander might be teething. I can’t see the tooth just yet. But he’s been biting his fingers a lot. 🙁