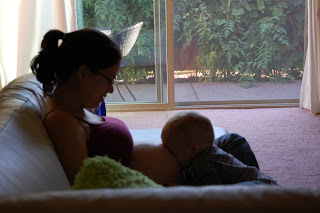 I am so close! So close!!
I really don’t feel that prepared. I guess you never are. I know what will happen and how it will happen and all that stuff….but I am still scared!! I guess it’s mostly because I don’t what it is gonna be like at home with a new baby! With Alexander it was all a breeze…but now with two…and one in his early terrible twos, oh boy!!

Still no name. Ty is rooting for both Quentin and Duncan (he likes Duncan better). But I just can’t name our boy that! It reminds me of Dunkin Donuts! And Quentin means ‘the fifth’ so no way…

I like Sebastian (which Ty suggested but doesn’t really like that much) but I don’t like the nicknames: Seb, Sebs, Sebas, Seabass, Bass, Seby….you name it!

I told yesterday to Ty that maybe we are having a girl and that is why we just can’t come up with a name. He gave me such a dirty look and said “Shut up!”. So hilarious!! Hahahaha

We still have time. We’ll come up with something, hopefully. If not he will simply be Byrd! 😀 hehehe Kidding!

Oh and on the photo…no, he is not kissing the belly, he is blowing bubbles on it! He loves doing that or poking it. Though his favorite is using mommy’s belly as a drum!